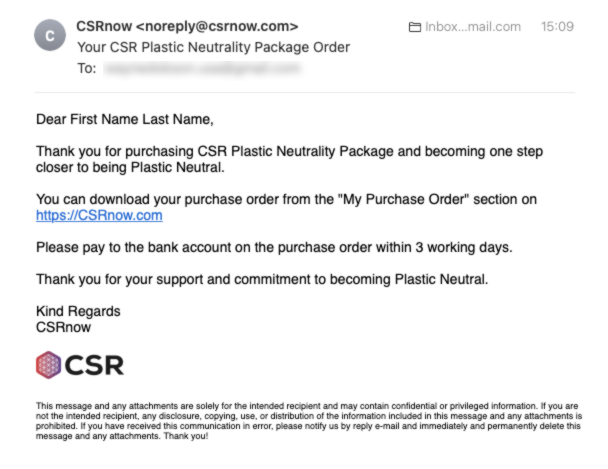 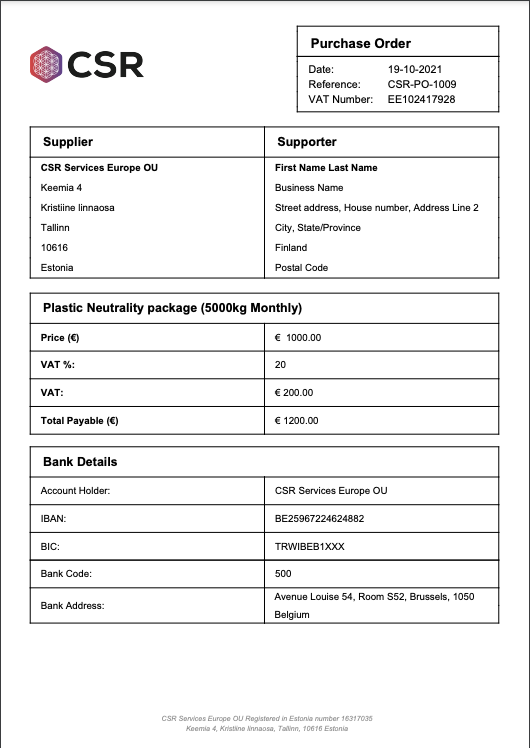 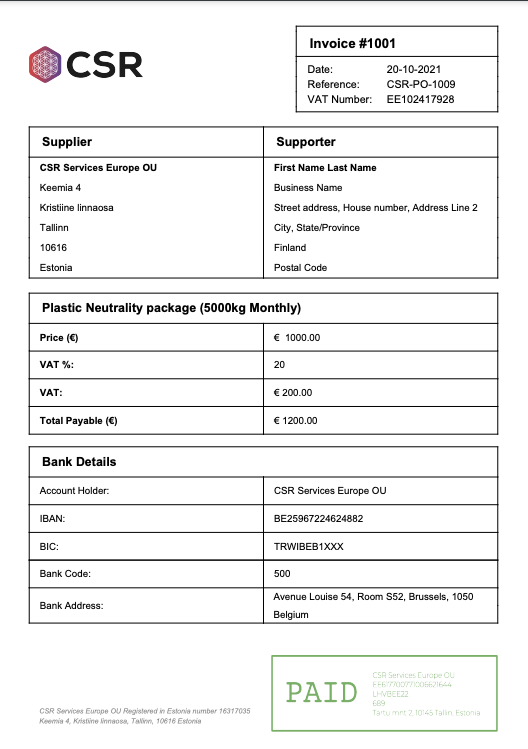 What is VAT Reverse Charge

CSRnow follows VAT and other regulations as guided by our professional advisors.

The VAT Reverse Charge mechanism is available when you, as a VAT registered entity, buy goods or services from suppliers in other EU countries.

The Reverse Charge moves the responsibility for the recording of a VAT transaction from the us as the seller to you as the buyer.

How does the Reverse Charge work?

When the Reverse Charge is applied you, the recipient of  make the declaration of both purchase (input VAT) and the our sale (output VAT) in your VAT return. In this way, the two entries cancel each other from a cash payment perspective in the same return.From the authorities’ point of view, they can see the transaction reported in the special boxes provided in the returns for cross border supplies of goods or services.

Where did the Reverse Charge come from?

The Reverse Charge mechanism was created when the European Union Value Added Tax system was reformed for the launch of the single market in 1993, to help simplify the VAT reporting across the 27 member states.

If you require additional information or support in connection with Reverse Charge or any other financial matter you should refer to your financial advisors.

My European VAT number is not accepted for VAT Reverse Charge

We understand you need to request your local state VAT authorities to be included in this system.

If you require additional information you should consult your financial advisors.

Do I need the Country Identifier on my VAT number?

Your VAT number will start with the Country identifier (2 letters) and be followed by a long number.

I purchased my PNP, when will I get my CSR

CSR allocations for purchases of PNPs will show in  “My CSR” (Click here) on or before the Friday of the week following payment being received by us.

Once you see your allocation you should enter your CSR wallet address at which you want to receive your CSR.

You will receive 10% of your allocation in the following working week and 90% over the next 6-12 months as Plastic Waste in Removed from the Environment.

How do I enter my CSR Wallet Address

CSR allocations are made to the a CSR Wallet address you provide.

If your wallet address is not showing on the allocation line in “My CSR” here you can click the pencil icon on the right to confirm your CSR wallet address.

How do I change my CSR Wallet Address

CSR allocations are made to the a CSR Wallet address you provide.

For your security and for the security of the token/platform it is not possible to change the CSR address once entered.

My Email address is not recognized

Any individual or corporation with an interest in CSR has automatic Guest access the CSR Portal.

If you wish you access your private holding information on CSRnow.com and your email address is not recognized you should contact us here.

Note all applications are manually reviewed. This manual review takes time and we ask for your patience.

We aim to process all applications within 7 days but in some cases this can take until 28 days.

My CSR Holder details are not showing correctly

If the details shown on your “My CSR” page are not correct follow the instructions below:

1. If you purchased your PNP on CSRnow.com click here.

2. If you purchased your PNP or acquired you CSR on another platform you should contact support on that platform.

What do the Applicaiton Statuses mean?

Application Statuses have the following meaning:

A status of “Issued” is given to CSR allocations that have been distributed to you in full amount.

A status of “Partially Issued” is given to CSR allocations that have been partially distributed to you. For example, you may have received a 10% distribution for a larger amount.

A status of “Incomplete” is given to CSR allocations where there is insufficient data for us to proceed with distribution.

A status of “Complete” is given to CSR allocations which have all relevant data from you.

A status of “Pending” is given to CSR allocations where there is sufficient data for us to proceed with distribution but is yet to meet distribution criteria.

A status of “Under Review” is given to CSR allocations that are being considered and are not yet approved or rejected.

A status of “Rejected” is given to CSR allocations that have erroneous data, are falsely claimed or have been considered and rejected. No distribution to such allocation will be made and the allocation is listed on CSRnow.com for reference only.

In upcoming months we will introduce an appeals process for Rejected CSR allocations where you will be able to re-submit the application or defend your claims.

Please monitor the official communication channels and this site for additional information.

Until such time as the formal appeals process is live, no additional review or consideration will be given to rejected CSR allocations.

A status of “Deleted” is given to CSR allocations where multiple submissions of the same application have been identified. Only one valid application can be submitted.

A status of “Security Hold” is given to CSR allocations that are considered for one reason or another to be at risk.

We do not have a record of your CSR address for this allocation. You can add the CSR address by clicking the pencil icon in the Action area on the right-hand column of the table.

What do the letters and numbers in the Distribution Position mean?

The distribution of CSR is segmented into various pools based on various criteria as below.

The letter identifies the Pool and the number is the allocation position in the pool at the time of viewing. When allocations from the pool are made the position number will decrease. The lowest numbers will be allocated next.

Allocations in Pool A are redemptions that were carried out before 15th May 2021 where the resulting CSR allocation was less than 100,000 CSR.

Allocations in Pool B are redemptions that were carried out between 16th May 2021 and 1st October 2021 where the resulting CSR allocation was less than 100,000 CSR.

Allocations in Pool C have applications for a discretionary award of CSR due to prior holdings of ISF where the application was made prior to 1st October 2021 and the resulting CSR allocation was less than 100,000 CSR.

Allocations in Pool D are redemptions that were carried out before 15th May 2021 where the resulting CSR allocation was 100,000 CSR or more.

Allocations in Pool E are redemptions that were carried out between 16th May 2021 and 1st October 2021 where the resulting CSR allocation was 100,000 CSR or more.

Allocations in Pool F have applications for a discretionary award of CSR due to prior holdings of ISF where the application was made prior to 1st October 2021 and the resulting CSR allocation was 100,000 CSR or more.

Allocations in Pool G are redemptions that were carried out after 1st October 2021. All Pool G Allocations receive an initial 10% distribution the following working week with the 90% balance being distributed within 12 months.

Allocations in Pool H have applications for a discretionary award of CSR due to prior holdings of ISF submitted in period of Oct 2021 until 31st March 2022.

Allocations in Pool J discretionary award applications of CSR due to prior holdings of ISF carried out in March 2021.

Allocations in Pool K are forced redemptions carried out on January 8th, 2022.

Allocations in Pool month name are allocations of CSR because of purchases in that month of 2022. You may find that initially your allocation is allocated to pool G pending final processing into the monthly pools.

I have multiple accounts at CSRnow.com can I use the same Ethereum Wallet address

In order to properly reflect the retirement of your CSR plastic credit as you progress, it is only possible to link 1 (one) CSRnow.com account to one Ethereum blockchain address.

My CSR Retirement is not visible on Hall of Fame

Note, chosen setting will apply to all individual retirement events.

You can learn more about the Retirement process at the Tutorial page on https://csrnow.com/content/learnings/tutorials/.

By default the name on CSR Retirement certificate and/or Hall of Fame displays the name of the account holder.

If you wish to display a Company Name instead, you can change this setting under the “My CSR” dropdown menu. There is a tab called “Retirement of CSR Setting” where you can insert the Company Name.

Type in the Company Name in the text box, check the tick-box next to “Display company name instead of account holder name” and click “Save”.

Upon refreshing the browser the changes will appear on certificates and on Hall of Fame.

You may stake / save your CSR at the Company’s vault and earn additional CSR. At the moment you can save your CSR for 6 or 12 months.

Please note, CSR savings period commences once Your CSR allocation reaches it’s distribution order. Until then you are able to cancel or change the desired savings period.

To learn more about CSR staking / saving read the tutorial at https://csrnow.com/content/learnings/tutorials/

Where else can I get help?

If you purchased your PNP or acquired your CSR on another platform you should review the FAQs on that platform as additional more specific questions may be answered there.

Should you still have questions you should raise a support ticket on that platform.

When will Merchant Applications Start

We hope to start accepting merchant applications early in 2022**

When will the CSR Merchants Platform Launch

The CSR Merchant Platform will offer a wide variety of  features to merchants.

The initial feature set will be available in Q1 2022** with planned enhancements already planned well into 2022.

When will the CSR Mall be available